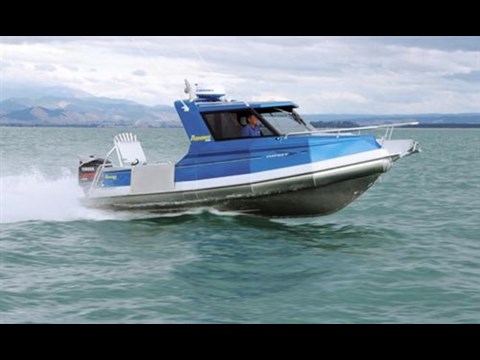 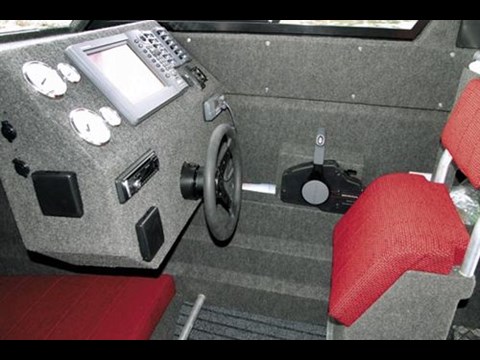 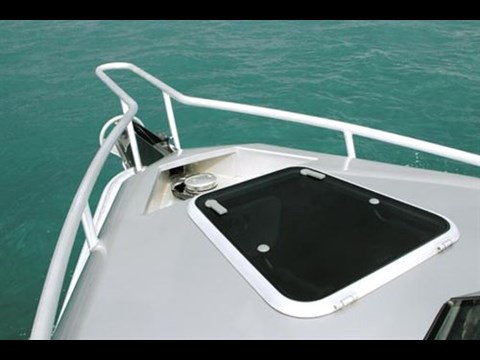 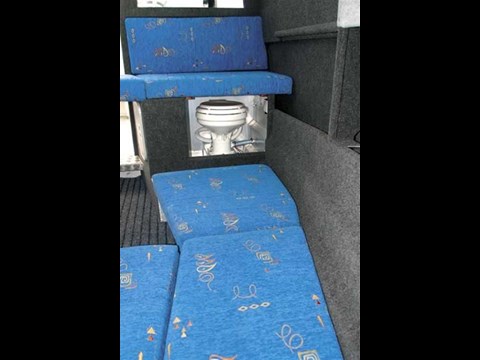 Untitled Document Alloyd Engineering began manufacturing its Osprey aluminium pontoon boats in 1996 and the vessels quickly established a reputation for durability and seakindly manners. They’re affectionately known as "sea trucks" by commercial fisherman and mussel farmers in the South Island, though that somewhat unflattering title has more to do with the boats’ dogged performance in rough seas than aesthetics.

Some 11 years later, the Osprey range extends from 4m dinghies to 8.5m extended hard yops, and the company is turning out around 45 boats a year. Much of the success can be traced to the sweet-riding hulls penned by owner/head designer Lloyd Elliott: sleek, deep V creations with fine-entry bows that knife their way through the turbulent Cook Strait seas.

The company has existing 650 and 750 hard yops in its stable, but this year has introduced a variation to these models, primarily designed to create more volume and comfort in the cabin. Osprey has always offered its customers a fair amount of flexibility in terms of configuring the internal layout of the boats, and Elliott says these latest changes are in response to direct feedback: "The best ideas often come from customers looking for more pragmatic features."

The main change to the new 650HT and 750HT is a slightly taller cabin structure, particularly noticeable around the bow. Where the cabin sides flared straight off the pontoons in earlier models, they now rise 100mm vertically before angling inwards.

This modification has not only created more headroom, but has also translated into a little more internal beam (about 150mm more) on both models. The result is greater internal volume, and while you could argue that the new structure creates a bit more windage, the trade-off is well worth it.

A secondary change is the hull profile: where the variable deadrise used to culminate at 20-degrees at the stern, it’s now been increased to 22-degrees. If anything, this has further softened the Osprey ride. Overall, the boats maintain their no-nonsense, rugged appeal.

All Ospreys are built to NZ Survey standards using marine grade alloy (5mm 5083 for the hulls, 3mm for the topsides and pontoons). The hulls are formed around a keel bar (covered by an additional, protective plate) and six longitudinal frames with cross gussets every 500mm.

Welded together, this integrated structure makes for a very stiff hull, and it’s divided into two, separate sealed compartments. The compartments are pressure tested, and together with the five buoyancy chambers in the pontoons, the boats have exceptional flotation, easily able to shrug off cockpit swampings. An independently fabricated fuel tank is built into the aft compartment, under the floor.

A feature of the Ospreys is the distance the pontoons extend beyond the transom. Elliott says they are designed to promote stability, and act a bit like trim tabs, helping to keep the boats level. A pair of planing strakes on either side of the hull impart good grip in tight turns.

Our 750 test boat is owned by a keen, Nelson-based fisherman, while the 650 is the very recent acquisition of Trade a Boat contributor Daryl Crimp.

It’s impossible to climb aboard the Ospreys without noticing the two-burner cookers under cockpit seat, and the electric winch/davit on the starboard side. The cooker confirms the view that these boats are generally owned by fishermen who pursue their passion irrespective of the weather – and for days at a time.

The winch? "Lots of people down here are avid users of cray pots and scallop dredges," explains Elliott, "and the winch and the recovery plate have almost become standard items on our boats. A full dredge can weigh around 100kg, so two men would struggle to lift it over the side."

Winch and cooker notwithstanding, the cockpits are more than able to cater for a team of four fishermen, and the array of rocket launchers on the bait board and hard top roof ensures they’d probably have their hands full.

Rod bays running either side of the cockpit and three watertight lockers built into the transom offer good storage. On the 650, one of these lockers has been converted into a live bait tank. A canvas awning extending aft from the hard top roof offers further protection from the elements.

To my mind, the real attraction of the Ospreys is the enclosed hardtop and cabin – a spacious but cosy area with excellent visibility. In essence, it makes recreational fishing in marginal conditions a reality, and probably means owners are able to utilise their vessels for a greater part of the year – particularly South Island owners.

The hard top cabin is separated from the cockpit by a solid bulkhead with a sliding door (much neater and more space-efficient than a hinged door). Elliott’s flexibility in accommodating clients’ interior layout preferences is evident in the difference between the two boats. The configuration in the 750, for example, comprises twin "leaner" seats (the owner has a rickety back and prefers to stand at the helm), while Crimpy’s 650 has a single, pedestal mounted helm seat.

Both boats exhibit clever use of space. The 650, to accommodate Crimpy’s family-fishing expeditions (wife and two kids), is particularly cunning. At his request the hard top’s rear bulkhead was shifted aft 300mm, and through clever squab design he is able to configure a cosy, four-berth cocoon. "A real pleasure for overnighting," he says.

Both Ospreys are fitted with Jabsco electric toilets, but where many boatbuilders position toilets forward, under the V-berth, these are tucked on the port side, opposite the helm, under removable squabs. Neither of the boats is fitted with holding tanks, though with all the storage space in the cabin bilge, it would be relatively easy to do so.

Marine carpet covers ceiling, sides and floor, adding to the overall warmth of the area, and helps to mute sound while under way. Energy-efficient LED lighting is used in the cabins, with a Weaver access hatch forward providing ventilation and natural light.

Both helm stations offer great visibility. The toughened glass windows (8mm for the front and 6mm for the side sliders) sport a pair of Speitch two-speed windscreen wipers. As Elliott keeps reminding me, people in this part of the world tend to go fishing regardless of the weather. "If it’s raining in the Sounds, you need wipers."

Crimpy’s 650 further underscores his point: it’s equipped with Furuno radar. Both boats have Navnet chartplotters with 1000w transducers, Uniden VHFs and Pioneer stereos. Electric Muir winches (fitted in a recess to keep the foredeck area uncluttered) tend to Manson anchors. You can access the foredeck through the Weaver hatch, or along walkaround side decks.

We launched the Ospreys at Nelson’s boat ramp and were soon barrelling across a lumpy sea – whipped into a half-metre chop by a chilly south-wester. With its deep vee and fine-entry bow, the 750 slid easily across the waves, with minimal crashing and banging, even at WOT. It’s fitted with Honda’s 225hp four-stroke – a magically quiet engine that propelled the 750 effortlessly, the response with the Sea Star hydraulic steering was feather-light. Bare hull weight is around 800kg.

At WOT (5800 rpm) the speedo registered 45 mph (experimenting with engine trim Elliott has coaxed 47mph from the boat). There was no way of determining fuel consumption, but the 750’s owner has taken it Durville Island on a fishing trip, and averaged 16 litres an hour. The fuel tank has a capacity of 380 litres.

Crimp has opted for Yamaha’s 200hp HPDI two-stroke VMax to power his boat. "It’s light, has fewer moving parts than a four-stroke, which means less maintenance, and it has a good power-to-weight ratio. It’s marginally less economical than a four-stroke, but at the end of the day it all depends on how you drive." At 5600 rpm, the 650’s speedo registered 46mph. Optimum cruising is around the 3900-4400rpm range. At 4400rpm the boat is doing 38mph.

Perhaps the best endorsement for the boats comes from their users: more than 20 Ospreys are ferrying tourists around the Able Tasman National Park as water taxis. The boats are also popular with government departments and harbour boards, who use them for surveying, monitoring and piloting duties – and dare we suggest, a spot of fishing?