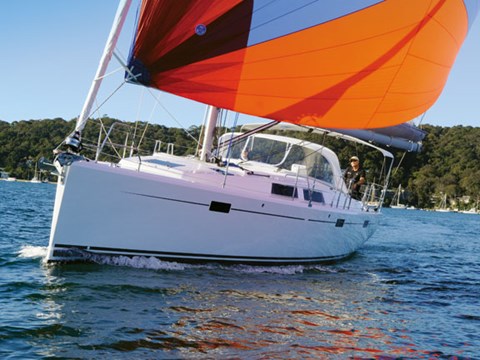 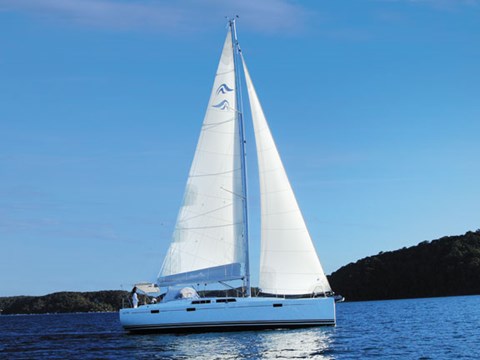 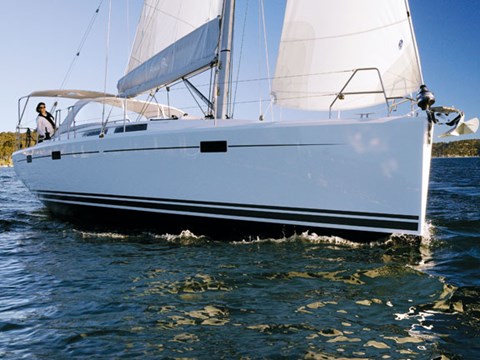 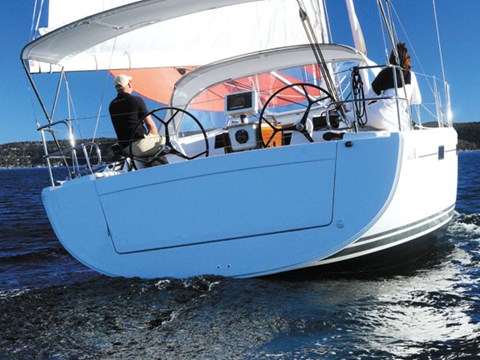 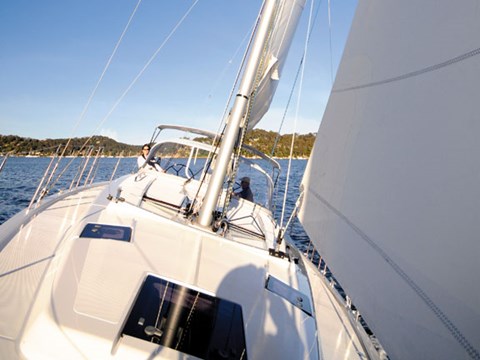 Replacing the most popular boat in the range is a tricky proposition, but Hanse has taken no risks with the introduction of the 415. It manages to retain all the 400’s good points and add some of its own. Allan Whiting reports.

After evaluating the new Hanse 385 against the outgoing 370, we were prepared for much the same exercise in the 415 vs 400 comparison, but that's not how it worked out. Sure, the 415 has a new-generation interior and deck layout that comfortably outclasses the 400's arrangement, but the 415 doesn't exhibit the rig changes that the 385 has. When we pitted the 385 against the 370, we noticed the more powerful fore-triangle in the new boat, but the 415's rig dimensions are almost identical to the 400's. If it ain't broke, why fix it?

While the 415's 9/10 rig, designed around a self-tacking headsail, is pretty much a carry-over, the hull certainly isn't. Where the 400 had balsa-cored deck and hull laminate to the waterline and foam laminate below, the 415 retains balsa-cored structure to the waterline and is monolithic below. Hull shape is also different, with broader, flatter stern sections and less rocker fore and aft of the keel. Plumb bow and stern profiles descend below the waterline, rather than "knuckling" above it and the rudder area is greater.

Afloat, the 415 retains the 400's painted cove line, but that line is broken by three fixed hull ports on each side, instead of only one. The former's hull ports make a big difference to ambient lighting when the deck hatch blinds are slid shut to keep sun-heat out.

On deck, the 415 boasts an additional flush hatch above the forward cabin, giving it a total of four opening hatches. The forward hatch is large enough to swallow a folded sail.

A broader stern increases cockpit space and, through aft-positioning of the clutches, gets by with only four winches instead of the 400's usual six. This absence of halyard winches on the coach house roof allows fitment of purpose-designed storage trays and cupholders, as well as watertight, lidded bins behind the dodger. However, some deck layout changes to the 415 are less obvious, including full-length toerails that are almost mini-bulwarks; teak-faced rope bins, with gas-strut lids that double as well-proportioned helm seats; and a slope change to the coach house aft moulding, allowing comfortable lounging on the cockpit seats.

A solidly mounted drop-side cockpit table doubles as a foot brace and grab-rail, and doesn't crowd cockpit space when folded. The test boat had a swivelling chartplotter on the aft end of the table.

As with previous-model Hanses the transom folds down to make a swim-platform, but greater stern beam now means a larger platform. Many yachts have integrated swim-ladders, but the Hanse's is stowed separately.

Like other new 5 Series Hanses, the 415 has a Dehler companionway door system with a drop-down door, and boasts a 'staircase' entry that's safe to walk down facing forward. Another bonus is a longer engine 'room' under the stairs.

Below decks the Hanse 415 expands on the 400's layout options and exhibits clever use of space. A three-cabin, two-head layout continues, as does the two-cabin, single-head layout. But in response to customer requests the aft storage cabin has been shrunk to allow either a small office module between it and the galley, or an extended galley with second fridge option. The standard galley is slightly larger than the 400's and bench and cupboard space can be increased in two-cabin boat set-ups by around 30 percent.

The 415's dinette is pentagon-shaped, not rectangular, taking maximum advantage of hull taper. Settees are arranged around this pentagonal plan and the dining table is shaped to fit, so that no one needs to reach for the table. When the drop-side is raised, up to nine people can share the table. The portside chart table is located between two settee cushions and can drop down, converting the space into a three-seat settee, or a single bed.

Wine storage is built into the centre pedestal and there's an additional bottle rack under the cabin sole beside the table. Cabin lighting and dimming is controlled from an optional central panel in the saloon on the end of the galley island.

Deck hatches are flush-mounted and there are ample opening ports in all cabins and the saloon. Ventilation shouldn't be an issue either, even when berthed crosswind.

We had a light southwesterly for our test sail, with breeze strength varying from three to 10kts. The 415 ghosted out of its pen producing little noise or vibration. Motoring around 7.5kts was effortless, with very little rudder shake under power. Reversing was positive, once the folding prop got a grip on the water and there was no tendency for the rudder to go over-centre.

We hoisted the mainsail with the boom dropped off to leeward, to allow sail bag access clear of the dodger, while the self-tacker unfurled rapidly. Instead of a traveller the mainsheet ran to cabin-top blocks, positioned ahead of the dodger.

The German mainsheet set-up and clutch bank positions allowed sheeting and locking from either the port or starboard aft winch. The Hanse 415 had no cabin-top winches but a pair of lidded rope bins aft, so there are no rope tails in the cockpit.

On the wind in light air the 415 consistently managed around half true wind speed and pointed in the 40- to 45-degree range. White-sail reaching saw boat speed increase by one to 1.5kts. Helm feel from the gunwale seating was excellent and gave the steerer a good view of the tell-tales. The boat self-tacked easily, while the helmsperson strolled from one wheel to the other.

Hoisting an asymmetric spinnaker in its snuffer tube proved easy enough and turning blocks on the broad stern provided a sweet sheeting angle. With the wind on the beam we saw 8kts on the speedo in 10kts true. The aso was tacked to the 415's short bowroller, so gybing the asymmetric was an outside-forestay operation. Shorthanded crews could easily unfurl the self-tacking jib before a gybe and sheet it hard, to form a "fence" and help the aso go around.

The 415 has put on some pudding in comparison with the 400 — around a tonne, of which 200kg is in the keel — so we doubt the club-racing Hanse 400 fleet will be embarrassed by the arrival of the 415. We'd certainly love to have the opportunity for a twilight fang between the new 415 and 385. I suspect the lighter 385 might have the edge around the cans in the right breeze.

For the latest reviews, subscribe to our Trade A Boat magazine here.